By the end of June, in agreement with the city hall of Javier, we decided to let the 2020’s European Heritage Days start, with this year’s slogan “Education and Heritage”. Everything was new and uncertain, the confinement during spring had just ended, so we were facing summer with as much excitement as uncertainty there was. Said this, the best option was to design a safe yet versatile plan for the Heritage Days, that could easily adapt to whatever may the future bring.  We had to do it, we had to do it for culture, for life, for giving work opportunities, even if they were small and according to our resources, but we had to get moving. So, the first thing we did was to connect our volunteers with the town of Javier, with its heritage and with its people as well.

Get to know each other, undertake, create

Once the program was projected with guided visits to the castle, summer concerts previous to the saved dates, talks about sailing during the times of Saint Francisco Javier, and the main course,  the outing of the paintings of the Dance of the Death at the Chapel of Saint Christ of the Castle of Javier, we presented it to the town at an open session in the City Hall.

Visiting over and over again

One of the things that the volunteer have done, especially María and David Rodríguez, was to learn a lot about the castle. They were present during many days of guided visits, they got plenty of reading material and then they rehearsed those visits on their own.

Another one of the studied spaces was of course, the Chapel of Saint Christ, or the Christ of the Smile. A small, non-visitable space. Why is that? Mainly for two reasons, the first one – at least chronologically- to preserve the paintings of the dance of the death, which are very close to the human touch. The second and nowadays most important reason, is that this space that invites to meditation and observation, makes it impossible to keep safety distances. It’s a heavy reason due to its sanitary importance

Besides learning, in our Association it is very important to create. We look for implication, creation, thinking for a better support and communication of heritage to new public spaces. We had a challenge in our hands: We have to preserve, but how can we spread something that’s closed to the public? There are many precedents and examples of this dilemma. Probably one of the best known in Spain is the case of the Altamira Caves.

With this idea on mind, with the help of the photographer María Cantero, and the architect Juan Roldán Marzo, we prepared an expositive design that would exteriorize the paintings of the Dance of the Death. It was fundamental that they could be seen closely, yet in open and safe spaces, and people could interact with them to have a better understanding of this iconography. Here are some pictures of the process.

This wasn’t an easy job for María Cantero. The space is very tight and dark too. It took many hours in the chapel and overall, a lot of time focused on the edition and adjustment of the images.The result was extraordinary and that helped Juan Roldán on the creation of individual panels from which the skeletons could be removed. Before going through all the paintings, he presented in Javier a prototype created with the help of his friends from “Rótulos Diper”

Until the day arrived, the music…

We thought it was a good idea to create previous events to the European Heritage Days. A jazz concert in the terrace of a bar in a summer evening was something convenient, nice and relaxing. So we did that.

We called our friends form Pamplona Jazz, who had already been with us on February in ‘”In love with a museum ” Back then, we couldn´t suspect the circumstances that would bring us together again.

Nevertheless, the important thing was the reencounter with Iñaki, Luisa and Ramón, and how great their music sounded, leaving astonished to all of those who hadn’t listened them before.

Here are some pictures of that August evening.

We had walked a long road for months. Bonds were tightened, Knowledge grew, we enjoyed it fully, and September 25th came and left as any other day, but leaving great memories behind.

That Friday we didn’t have the usual summer weather of past Heritage Days. It was cold, on Saturday it rained, but we felt the warmth of the Heritage, of the fruits of a thoughtful work done for a long time. That Friday 25th we greeted members of the Institute of Naval History and Culture, Eduardo Bernal and José Cánovas. They talked about “Sailing in the times of Saint Francisco Javier” and the circumnavigation of Magallanes-Elcano”.

We filled our allowed capacity. Everybody helped out by having a seat and keeping a distance, and the hotel staff meticulously took care of the distribution of the room for the people’s safety. The next day, people arrived to enjoy the guided visits that María and David had rehearsed so much

It was lovely to watch the support and affection they received from their firends. All of them came to Javier to discover the castle in a very special way. The public that day was heroic. Bad weather, rain and cold, and yet they were there

The groups of each guided visit, normally with a máximum of 20 people, were now reduced to 15. That meant we had to put extra work because the demand was bigger, but we delightfully complied.

One of the essentials of this exhibition was, as I said above, interaction. To get people to enjoy and understand, and therefore, to leave with the feeling of discovering a new face of Javier, appreciating its heritage a little more. There were very fun moments and many people took pictures. Here are some of our volunteers.

In the afternoon we had scheduled a visit to the “molinaz”, ( The molino) the ruins of an ancient mill next to Javier. A walk by a gorgeous river, but unfortunately they day didn’t help us. Our volunteers went through the route and verified that there was too much mud and tangled roots that could end in a dangerous accident, specially four our elderly visitors.

We opted to listen to the talk at the City Hall, and it was great to listen to Enrique Galdeano. In a pleasant yet insightful way, he made us realize about many dilemmas that come up during art restoration, about our experiences facing ruins and the meaning of ancient buildings through time.

At last but not least, with Jorge Feito , Technical Manager Mining at Geoalcali a present and on-line talk about “Nurturing the earth”, because landscape is part of our heritage as well, and knowing how to take care of the field that surrounds us is very important.

The only thing left to say is that finally, for another year, we’ve peaked. Thank you all for coming, Thanks to the town of Javier for trusting Patrimonio para Jóvenes on the management of this European Heritage Days.

Art and Entertainment at Larraya 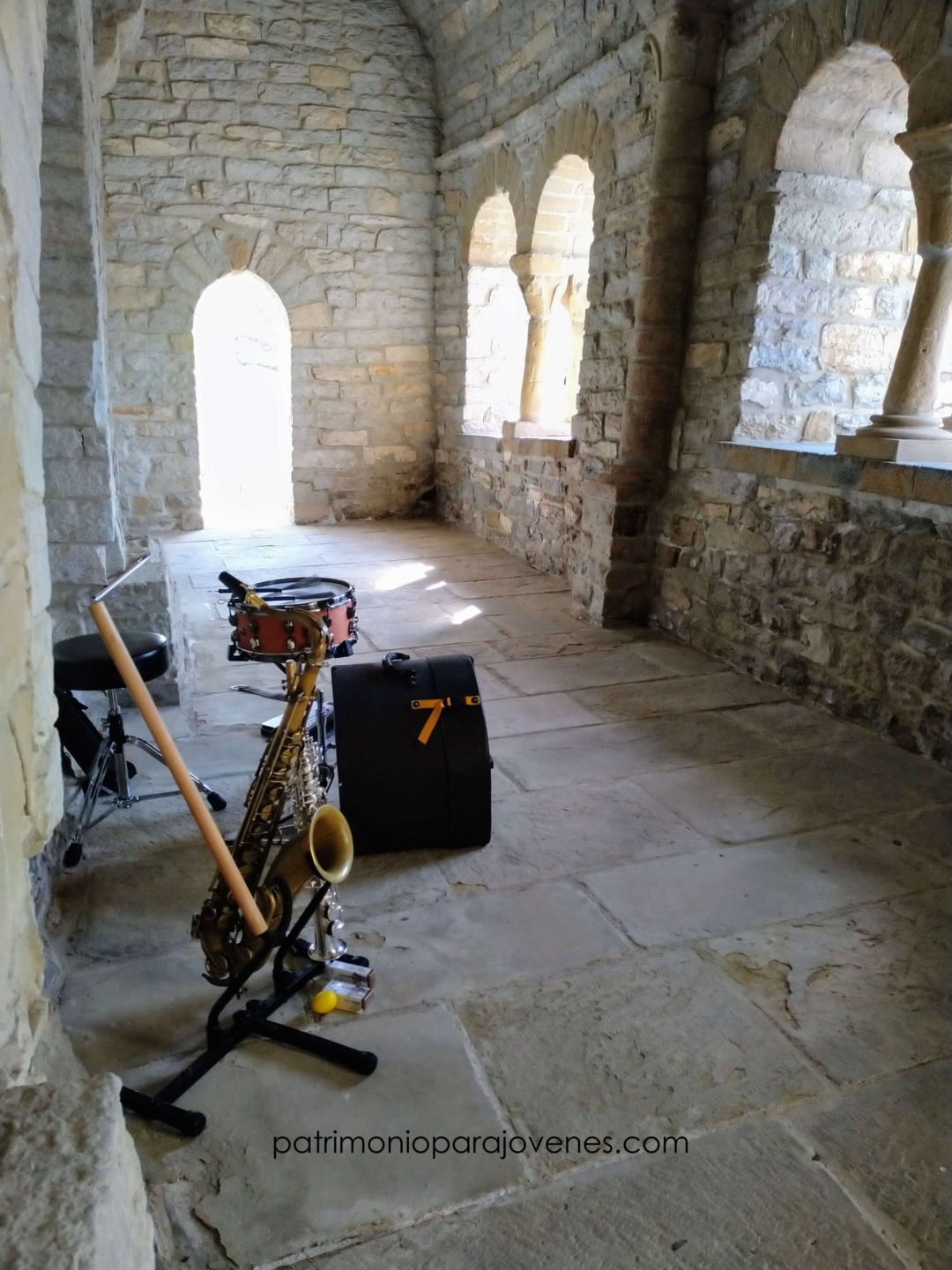 GIVEN VOICE TO THE HIDDEN HERITAGE (ONCE AGAIN)

Here we are. This is one of the main goals at Patrimonio para jóvenes. Hidden heritage, small beauties, not very important, not big enough to be visited by big tourist groups. But a heritage belonging to a village, a people, an identity.

We have travelled at Larraya, at least twice.

ON THE ROAD TO EUROPEAN HERITAGE DAYS 2019 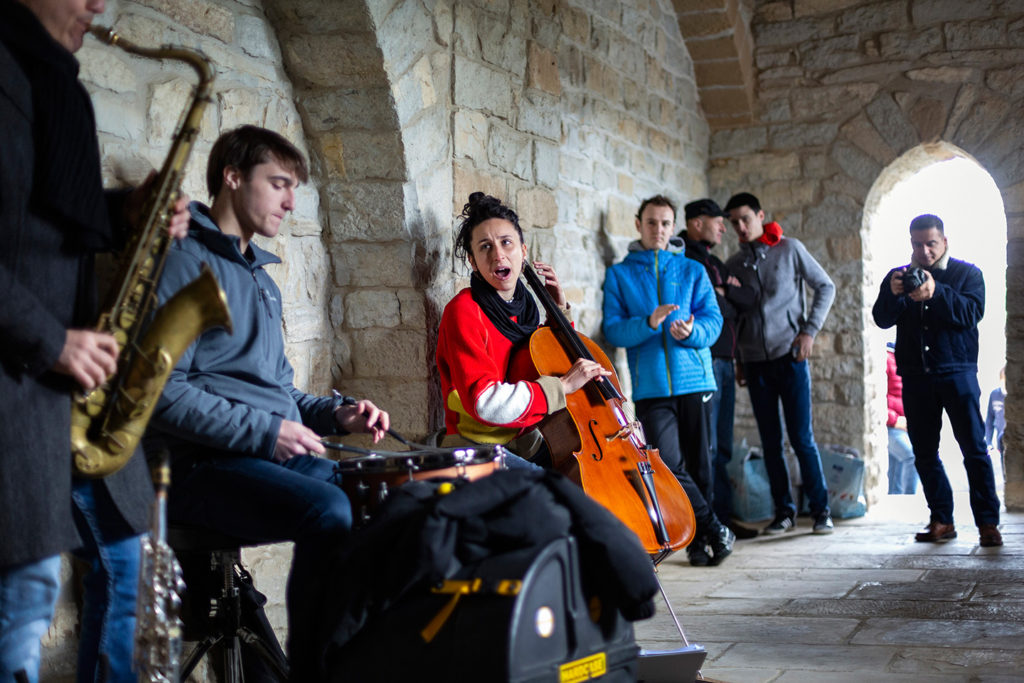 This year the slogan is Art and Entertainment.On the website of the European Heritge Days you can find more information about it. Here are some ideas: “Will be exciting to witness diverse European cultural traditions share a collective stageate the 2019 European Heritage Days. From street shows to concert halls, traditional theaters and museums to modern cinema and digital art, entertainment heritage of Europe will play out on local, national and European stages for visitors and guests of all ages to enjoy.The all-encompassing theme will include sports, photography, tourism, circus, fairs, visual arts, cinema, radio, and television among other entertainment-inspired art forms” 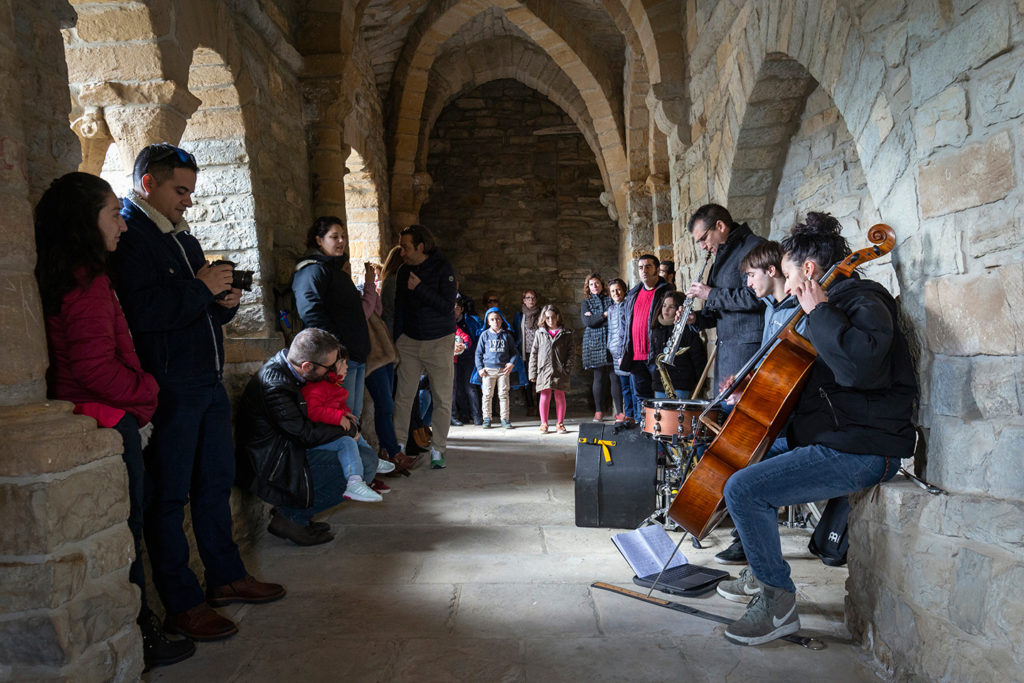 Here you can see us wtih local sport as ” pelota’, music, and the architecture as the satge and meeting point.

A MEDIEVAL  PORTICO AS A STAGE

First of all, this small church and its protico must be known. Musicians from Pamplona Jazz orchestra visited first the place. We remembered one of the functions of “porticos”: a place of entertainment.( The main functions were liturgical, morturary and also as a meeting point for the village council)

After the concert, we had a visit to the inside of the church. Today restored, it conserves a nice atmosphere given by the Romanic architecture. San Roman of  Larraya is cute and peaceful.

Its so nice the tabernacle, done in Renaissance style. 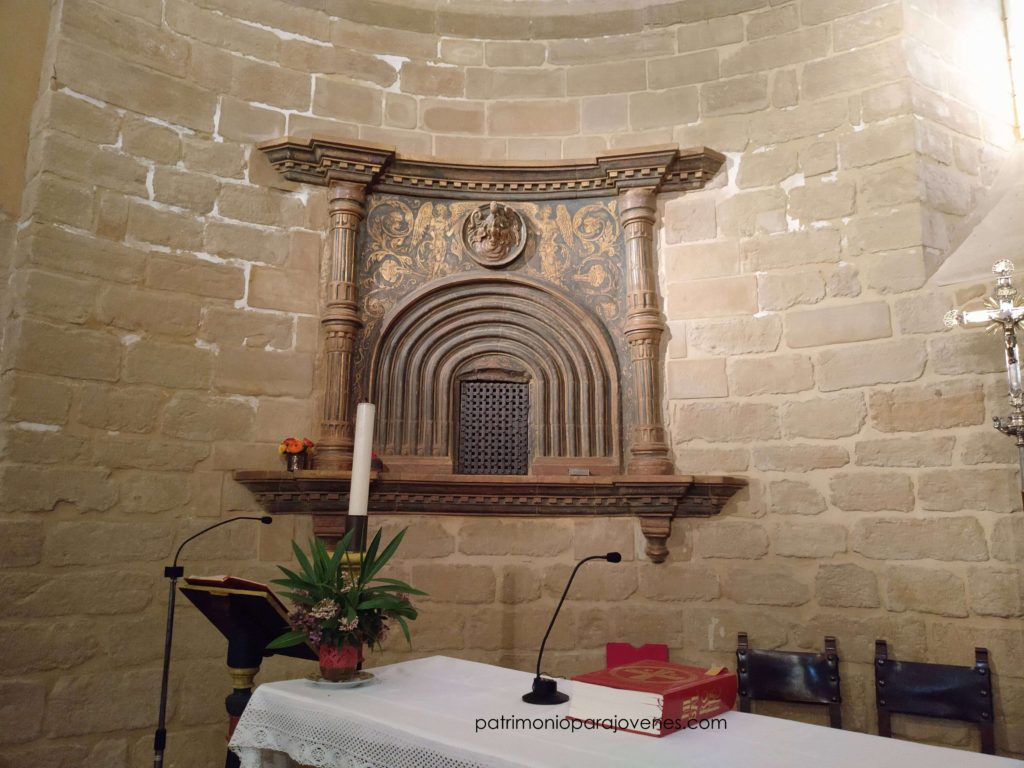 AND HERE WE ARE AT THE FROTON

Nothing better than this to share and promote the ludic aspects of heritage. A fronton beside a church. Places where a community is gathered for prays and games Juan Barriola, one of the people in charge of Pelota Club of Ardoi, is very concerned about protecting frontones with its original function.

A palace “cabo de armería” typical from Navarra. It was so nice the chat with its owners Martin and Visi. They tell stories, memories, and so on , that everything concludes on alive heritage

THE VALUE OF THE LANDSCAPE 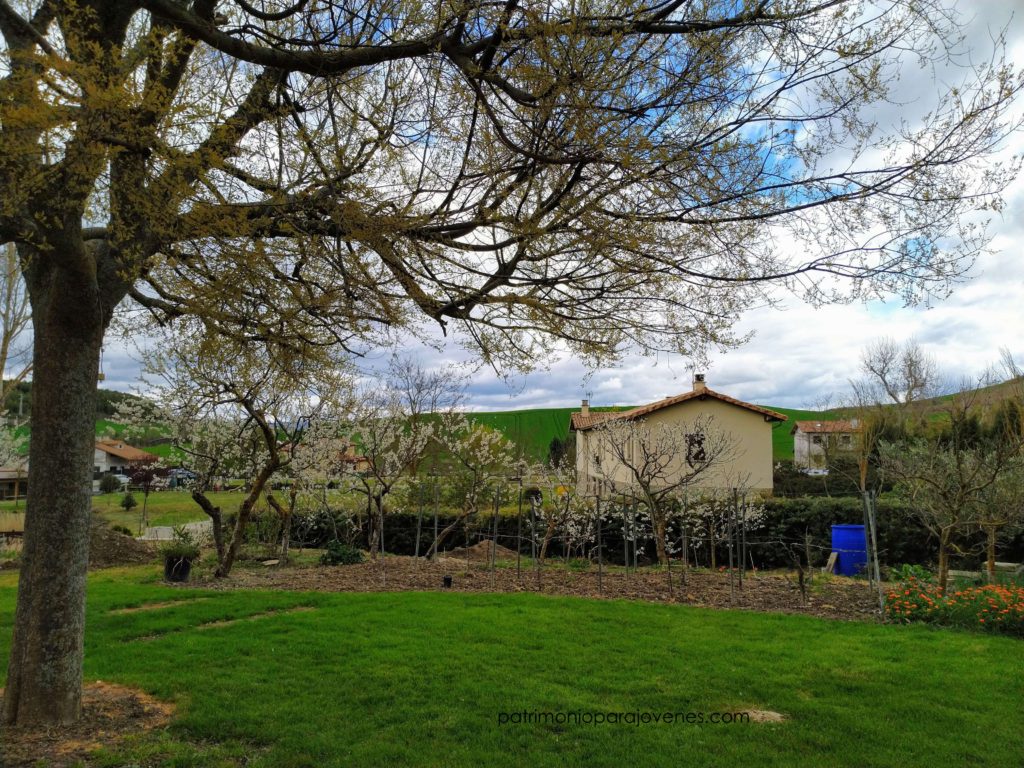 The landscape as heritage itself. The place where architecture and art in general are located. 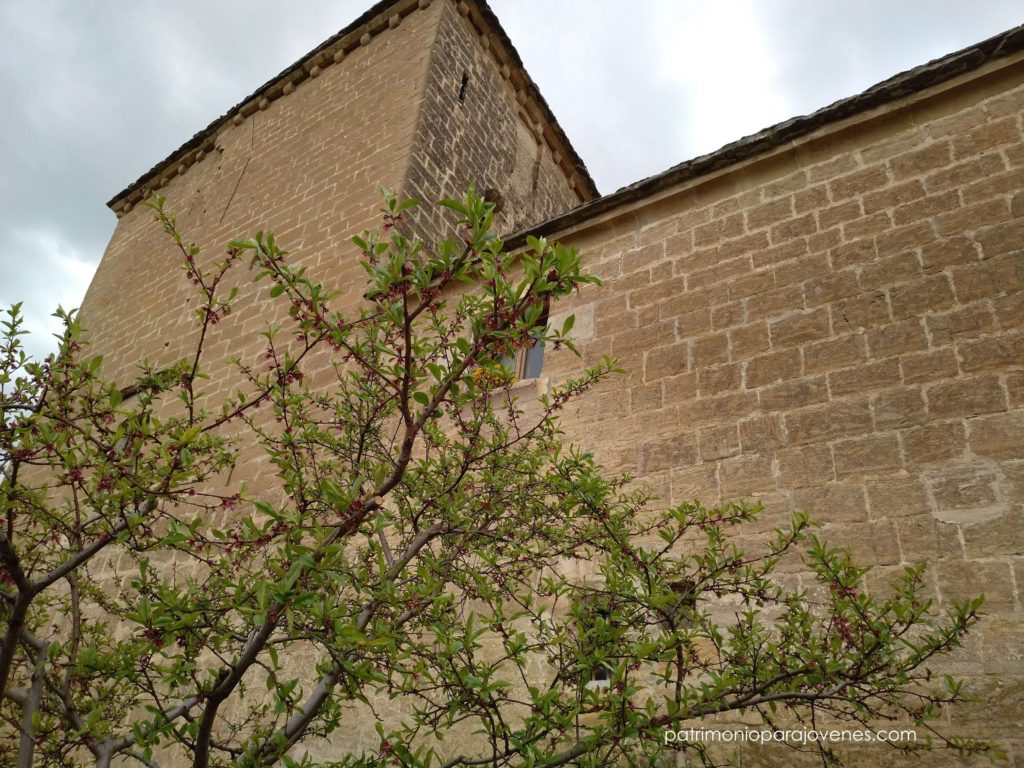 Larraya in spring time has a soft aspect, relaxing, green. A kind of small English countryside. 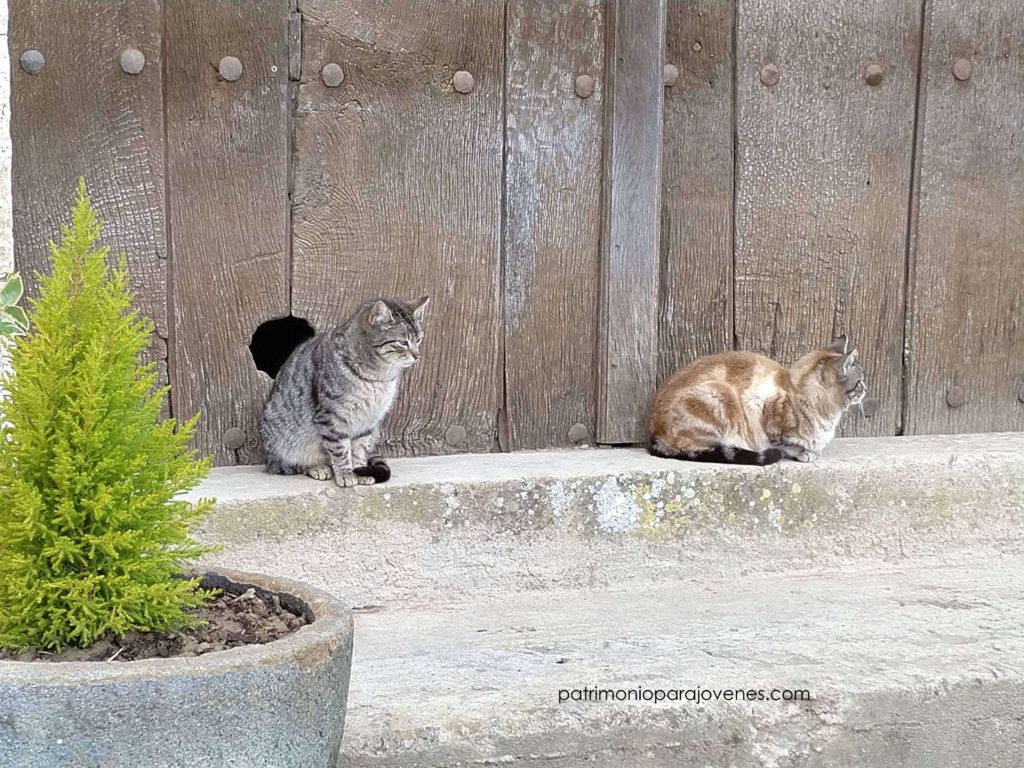 AND IF YOU ARE IN SPAIN, DON’T FORGET TORTILLA DE PATATA

Tortilla, red wine, chorizo and all of the famous typical tapas or pinchos from our country. 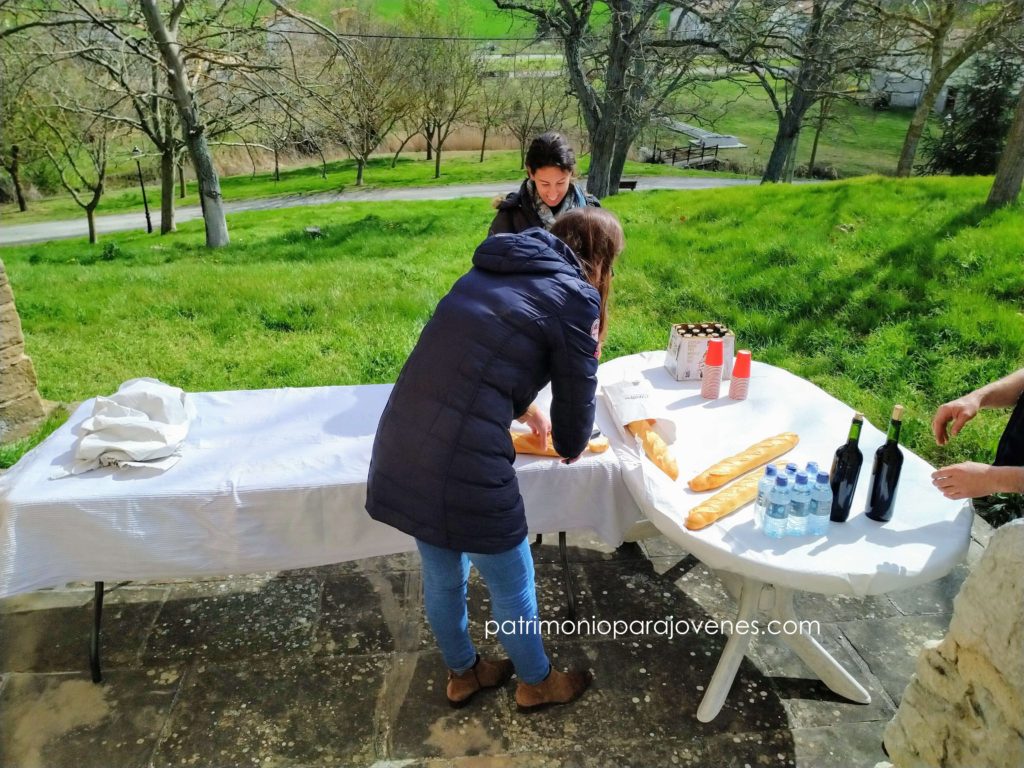 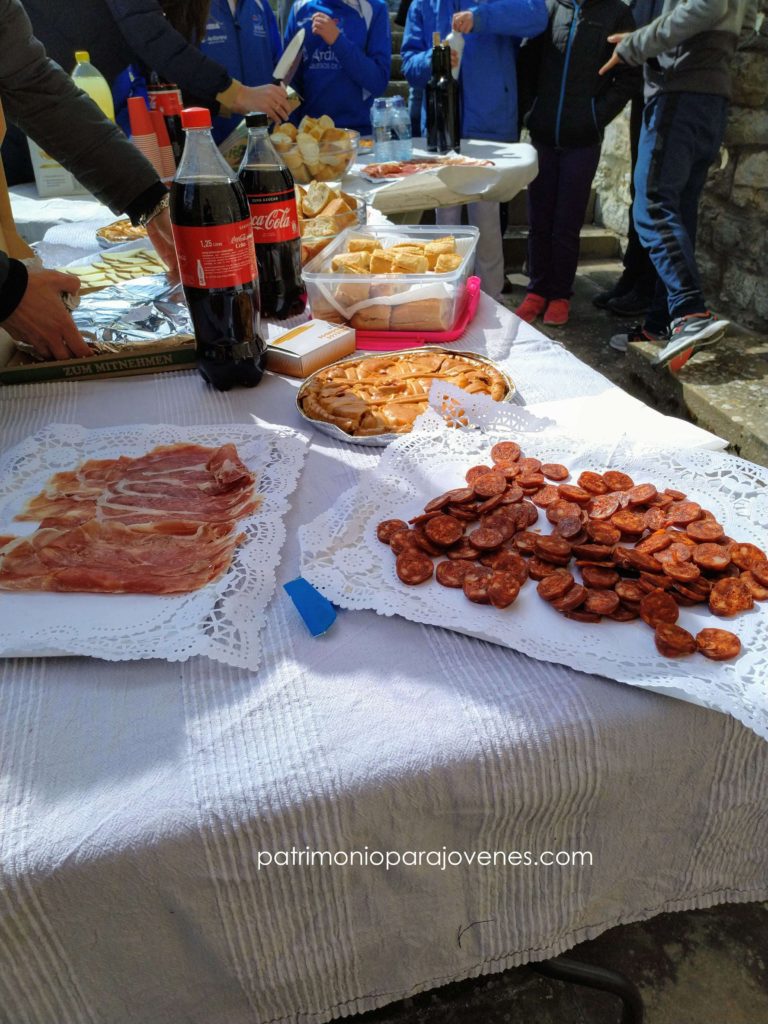 A good way to enjoy conversation and the friendly people of Larraya. Once more, remember, the heritage is alive when is visited.. The video by Clara Frago , here 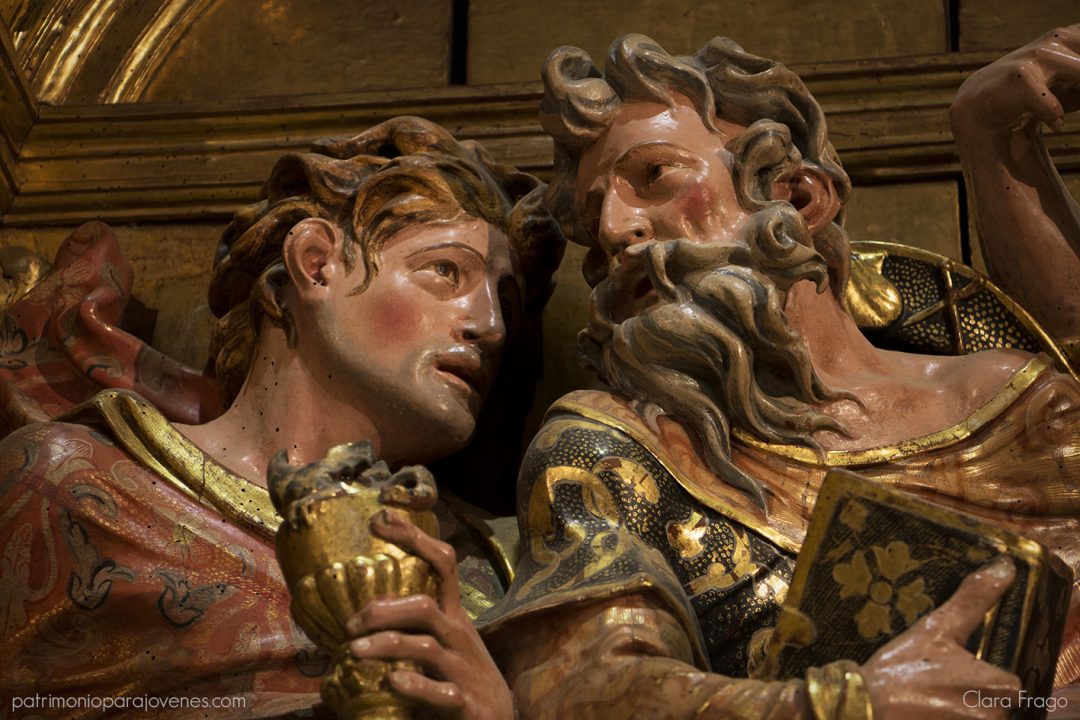 At the end of May, when we visited Genevilla, I knew we had to come back. Its heritage, landscape and friendly people are well worth visiting again.

But I never imagined that the visit would come so soon.

I was reading a local newspaper when I came across news from the government of Navarra. They invited the city halls of the different villages of the region to participate at The European Heritage Days. One of the conditions was to present the program with a cultural association.

Patrimonio para jovenes had kept in touch with the people of Genevilla and offered our proposal: A workshop about the altarpiece of the parish. An awesome, stunning piece of art from Renaissance.

And the day arrives!

And the 1st of October, there we were. And we couldn’t believe how many people came. It was a joy. But we were certainly dealing with a challenge: to talk to such a big group with a range of age we are not used to. 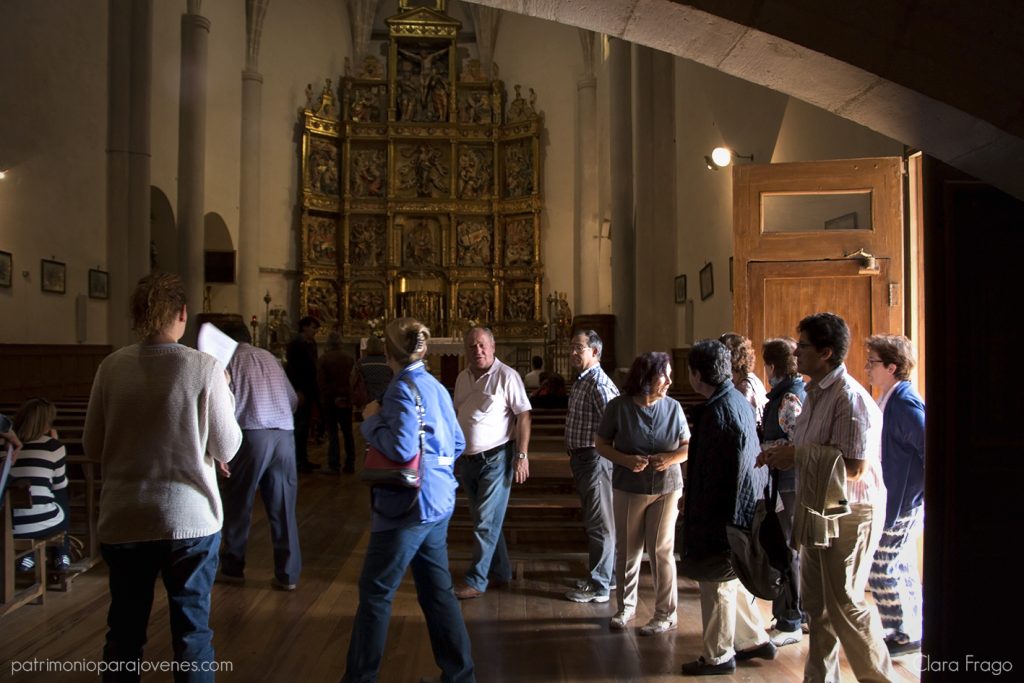 Everybody was very interested and some of them looked carefully with bicoulars. So they appreciated the details from sculptures and how they were carved and polychromed. 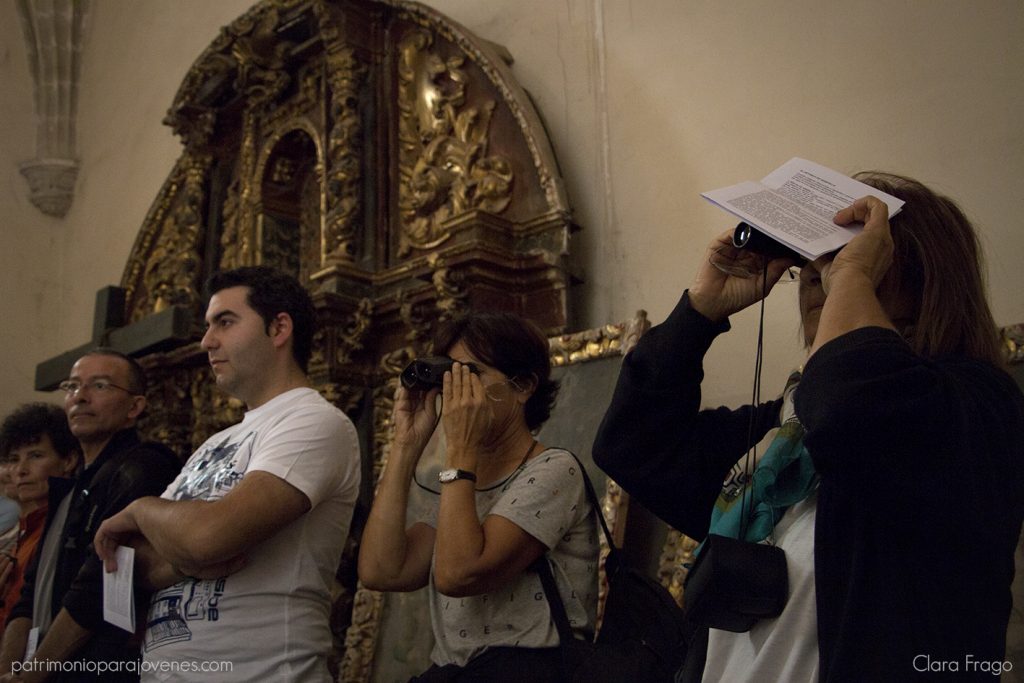 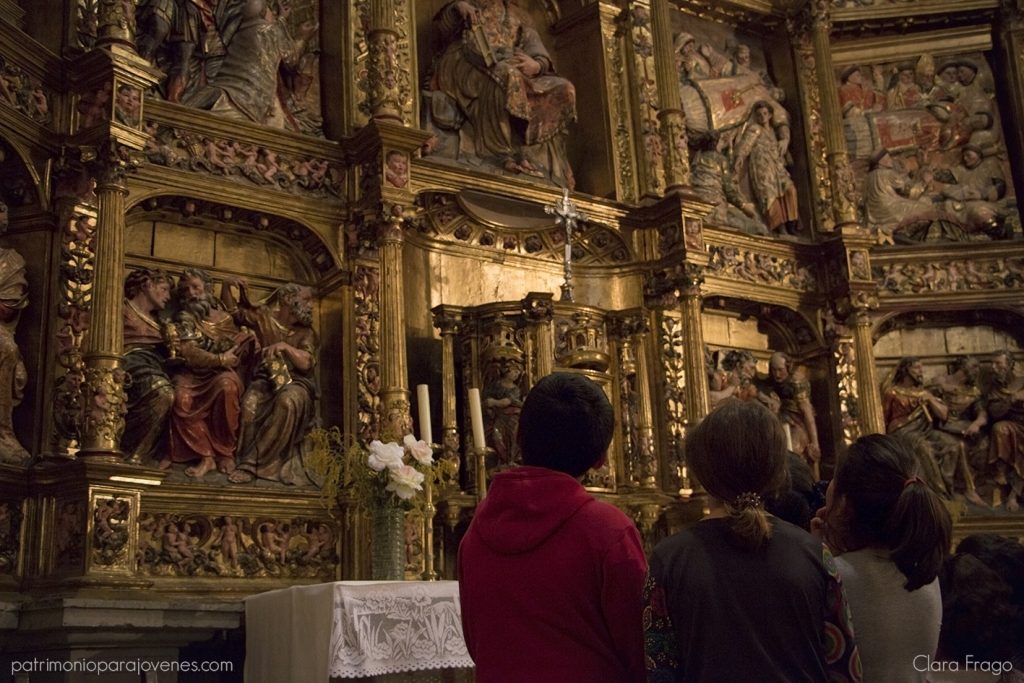 For children we prepared some big papers with the designs from the friezes of the altarpiece. Kids were looking at the altarpiece first and then they colored in the way they preferred. They had fun. By the way, thank you to the team that came as volunteers to take care of them. 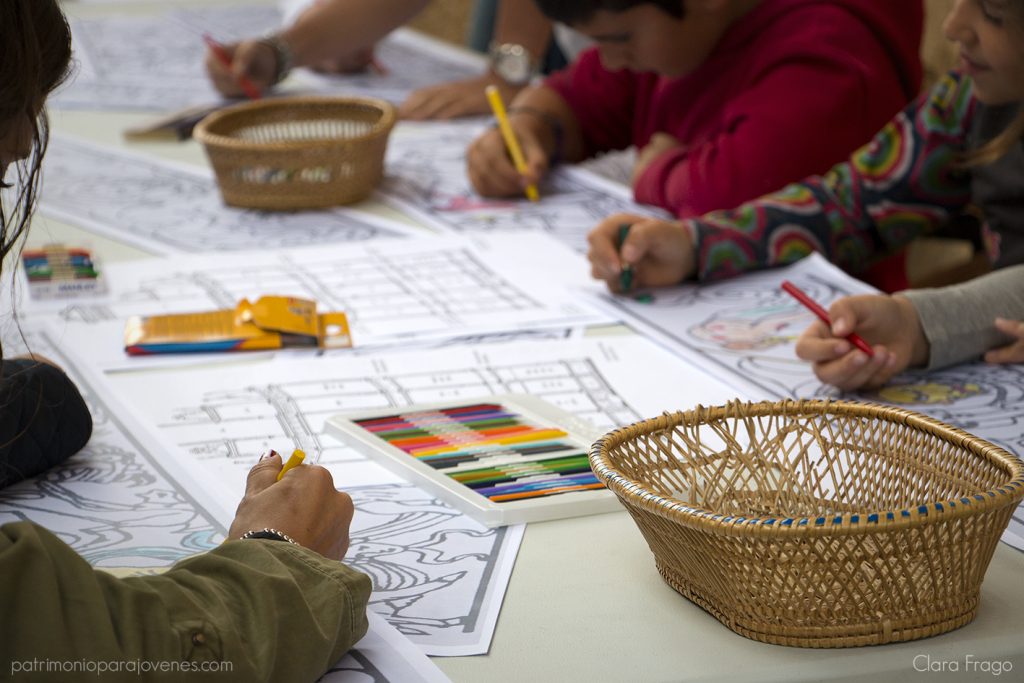 After visiting the altarpiece, we had appetizers courtesy of the village council. It was a great time to talk, find old friends and make new ones. 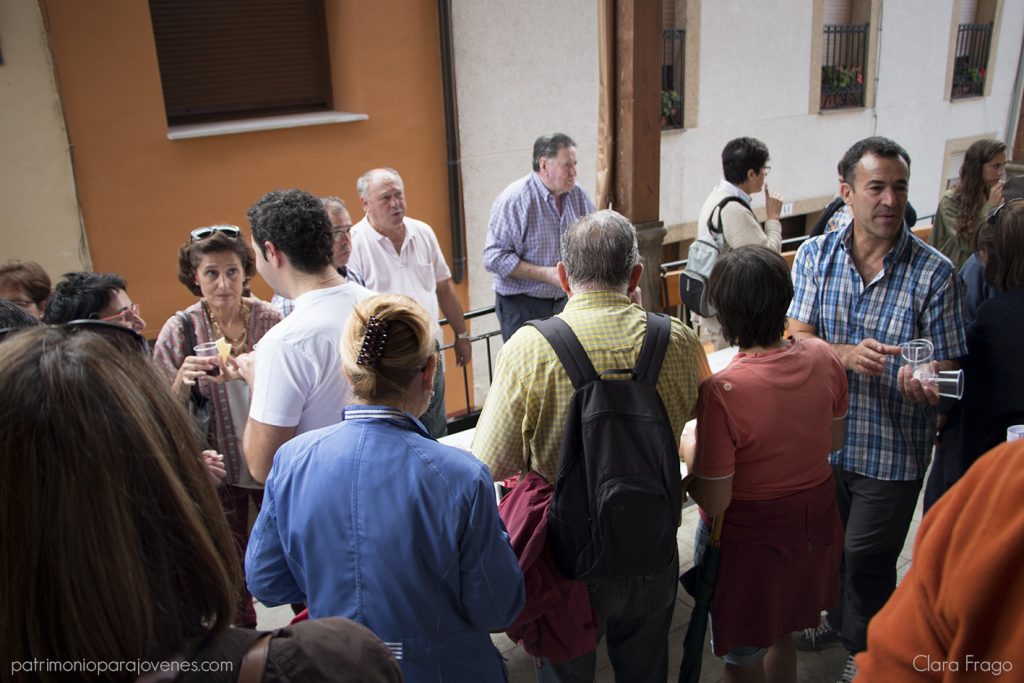 Here is a picture with some of us. It was such a cute, nice, friendly morning at Genevilla. 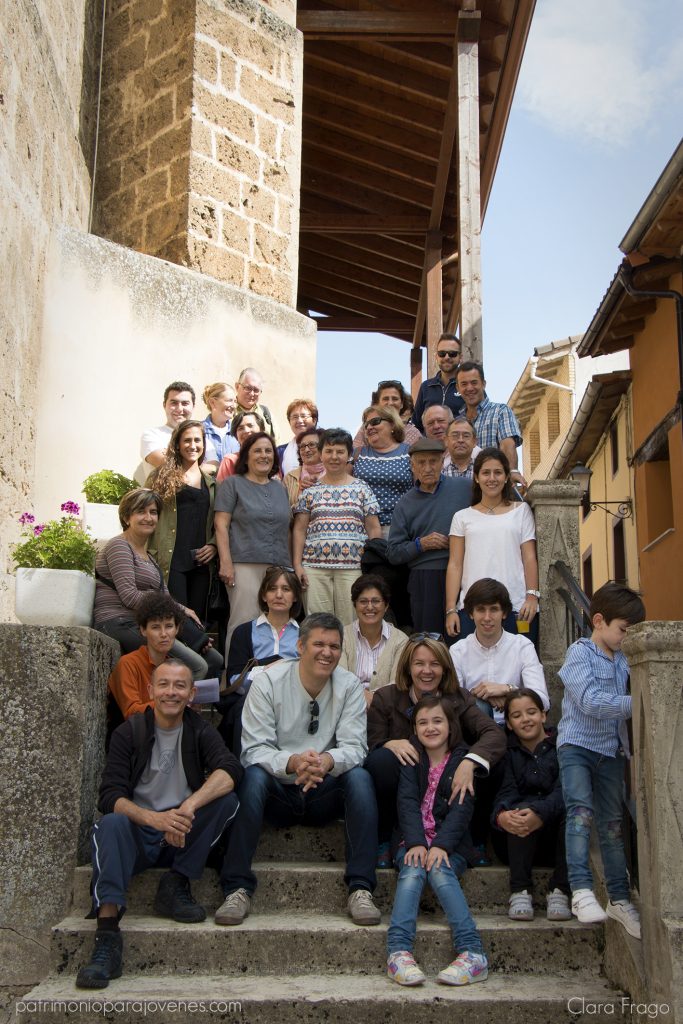 And here you have the links to some websites that can be helpful if you want to visit this area :